Reynaud improved his praxinoscope, transferred the drawings to celluloid tape (35 mm) and highlighted it on the big screen in the circle of his family and friends. It is this date that is now considered the year of the birth of animated films. Since 1892, Reynaud has been organizing special screenings at the Grevin Museum and giving them the name Optical Theatre. Thus, Émile Reynaud is considered the father of animated cinema. His film “Around the cabin” (“Autor d’une cabine”, 1894), in which there is a real, with elements of humor, plot (it takes place on a sea beach), the French film historian Georges Sadoul called a key moment in the development of animated cinema. In 1910 Reynaud, depressed by the failures that followed, drowned all his equipment and his films in the Seine. In 1916 he died in a poor people’s home.

Edison filmed with his kinetograph the process of sketching by John Stuart Blackton, illustrator of the New York World, resulting in the film Blackton, the Evening World Cartoonist.
The American Blackton, one of the pioneers of cinema, the inventor of many devices and various methods of shooting (by the way, the famous “American plan”), died in poverty in 1941.

John Stuart Blackton and Albert E. Smith made the first puppet film, The Humptu Dumptu Circus. They used wooden toys, as well as the illusion of movement effect they discovered by chance while working on a stunt film, when they turned off the camera for a short time to replace the subject.

Brian Arthur Melbourne Cooper directed Matches: An Appeal, which uses animated matches (the film called for help to soldiers who fought in the Boer War). In 1907, Cooper directed an animated sequence in which he used teddy bears (“The Teddy Bears”).

Spanish cinematographer Segundo de Chaumont, who worked in Pathé’s Barcelona workshop, adapted a stop-motion camera to shoot an animated film, El Hotel Electrico, in which inanimate objects moved. He also invented the technique of “live inscriptions”. The letters randomly scattered in the frame themselves took shape before the eyes of the audience into various inscriptions.
Similar initiatives were picked up almost simultaneously in the United States and France.

John Stuart Blackton and Albert E. Smith, founders of the Vitagraph Film Association, made the Humorous Phases of Funny Faces series of animated films.
Walter R. Booth is making the film “The Hand of the Artist” about how a painting appears from under the hand of a draftsman and how it “comes to life”.

The Frenchman Emile Cole (real name – Courte), the founder of graphic animation, showed his first animated film Fantasma Goria, or the Nightmare of a Fantosh (Fantasmagorie). French historians consider him the first master in the field of animation, since it was he who “breathed life into the drawn figures”, which he called “fantoshes” (from the French fantoche, which, in turn, goes back to the Italian fantoccio puppet, puppet). Kohl was a cartoonist by profession. He drew his films himself – frame by frame, on sheets of white cardboard – and shot them one by one. In two years, he made more than thirty animated films for the Gaumont company. Then he left for the United States. It is to him that animation owes such innovations as the combination of a feature (acting) film with a drawing – “The Shining of the Spanish Moon” (“Claire de Lune espagnol”, 1909) – and puppet films. He had a rich imagination and high professionalism, he was the creator of numerous series of animated films in America, and in 1914 in France. At the end of his life, Emil Kohl ended up in a shelter for the poor, and in 1937 he died of burn wounds. Almost all of his works have been lost.

The premiere of “Little Nemo” in which Windsor McKay (the “Griffith of the comics” as he is sometimes called), working for the New York Herald, used his experience as a comic book draftsman and achieved high level in animation technique. This film, for which 4,000 drawings were made and 35mm frames were hand-coloured for greater effect, inherited the iconic system of the comic book – the characters screamed in traditional comic “bubbles”: “Look, we are moving! “. His third film, Gertie the Dinosaur, was shown on February 8, 1914 at Chicago’s Palace Theater to huge audiences. And The Sinking of the Lusitania (1918) anticipated everything that animated cinema did in the next three decades.

Later, this invention gave rise to the creation of the “Optical Theater” by Emil Reynaud, where performances of “drawings come to life” were shown to a mass audience. And on October 28, 1892, in Paris, in the small theater of the Grevin Museum, there was a sensational premiere of the luminous pantomimes of the “Optical Theater” by Zmil Reyvo, accompanied by music, singing and various sound effects.
The first performances of this theater were the pantomimes “Poor Pierrot” and “Around the Cabin”, which enjoyed great success with the Parisian public. Each tape contained about 500 drawings, designed to be shown for 12 minutes. These pantomimes were the first artistic animation – the forerunner of the art of the cartoon film.
Emile Reynaud is not only the inventor of technology, but above all, the creator of the elementary foundations of animation. Even before the birth of cinema, he found the main method of animating drawings, which in France was called “image par image” i.e. image after image, drawing after drawing, now widely developed in the cinematography of the art of the cartoon film. Interestingly, even then, Emile Reynaud found a way to separate the drawings of the movement of his characters from the scenery against which these movements were reproduced. Drawings for his pantomimes were made by him on transparent gelatin plates, each of them had two holes at the top and bottom, which allowed Emil Raynaud, as in modern animation, to accurately adjust the location of the drawings.
The successful development of photography made it possible to later replace drawings in the stroboscope with photographs, and the invention of a transparent celluloid tape coated with a sensitive emulsion, and the birth of the movie camera made it possible to increase the number of individual pictures and opened up great prospects for “animating” the picture on the screen. 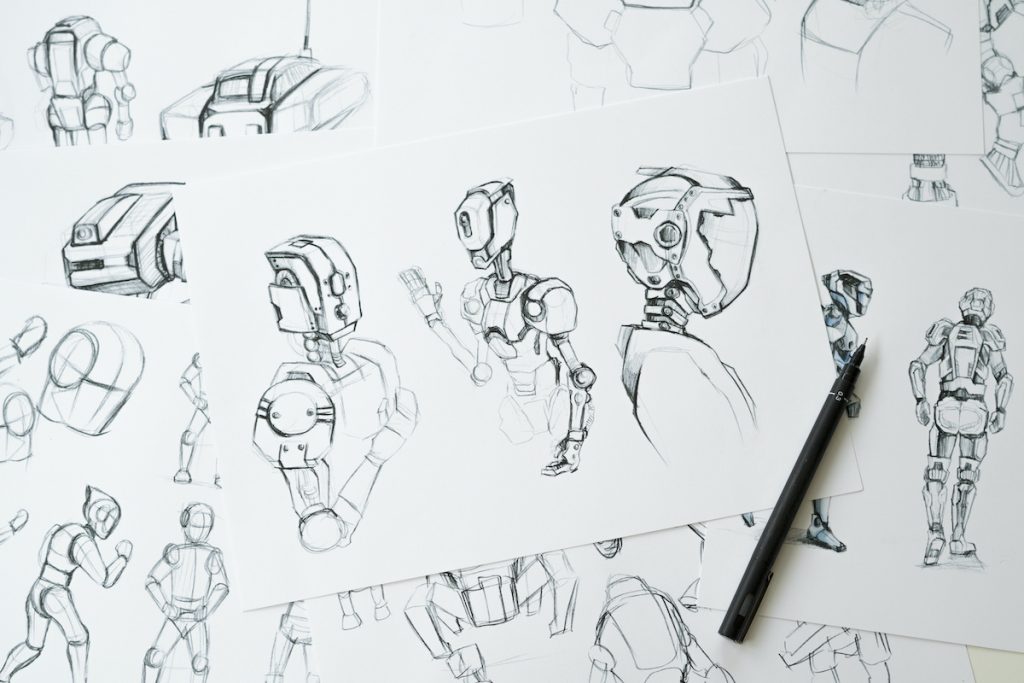 The invention of the Lumiere brothers, who in 1895 developed the design of a movie camera for shooting and projecting moving photographs, calling it cinema, dealt a death blow to Émile Reynaud’s Optical Theatre. An experimental demonstration of the film, shot on film, took place in March 1895, and at the end of December of the same year, the first cinema was already operating in Paris.
The invention of the cinematography by the Lumiere brothers in 1895 supplanted animation. For some time, she was forgotten, carried away by the prospects of a rapidly developing game cinematography. But a little time passed, and I had to turn to animation again. The turn of movie cameras and film has come … Therefore, formally, animation is considered not the great-grandmother, but the younger sister of cinema, and the appearance of the first cartoons (“film” in English is film) dates back to the beginning of the 20th century.
American Stuart Blackton discovered the secret of stop-motion animation – image by image, called in the United States “One turn, one picture” – one turn, one picture (when one turn of the cine camera handle fixed one frame of the image on film). In Stuart Blackton’s first film, The Haunted Hotel (1906), all things moved around the room without outside help. Then this phenomenon was regarded as some kind of miracle.
After several months of searching, European technicians managed to solve the “secret” of Stuart Blackton. But Stuart Blackton, who found the method of stop-motion animation, did not create the art of animation in cinema. He only discovered a technique, failing to fully develop it and create a special kind of art on the basis of it.
This problem was successfully solved in 1907 by the French caricaturist Emile Cole, who began to enliven the drawing in cinematography using the frame-by-frame method.
Emile Cole was a student of the famous artist, member of the Paris Commurade André Gilles; before starting his work in cinema, he performed illustrations in various magazines in the form of a story in pictures without captions. The first showing of his animated drawings to the public took place on August 17, 1908 on the screen of the Gimnaz Theater in Paris.
In 1908 in France, Emile Colle made an animated series about “phantoshes”, the first series of which “Phantasmagoria” was released on August 17, 1908 – another birthday of the cartoon. In animation, Emile Kohl created his own style of drawing, where the simplicity of graphics was dominant, where there was always a sense of caricature, which allowed him to produce diverse “image puns”. The lines of his drawings miraculously transformed, forcing to appear on the screen a variety of things that the artist’s imagination could give birth to.
It should be noted that among the numerous works of Emile Kohl, the first permanent character of cartoon animation appeared – the fantastic, grotesque hero Fantoche (le fantoche), whose merit was that even then, despite the primitiveness of the drawing, he was endowed with his own specific character.
E. Kohl’s films were always humorous, parodies, everyday scenes, and sometimes political cartoons were played in them.
Emile Kohl was also the first particular director of graphic animation.

Annik F. Leger developed rapidly and staged the famous “Mechanical Ballet”. The pictures were drawn directly on celluloid film and depicted figures that diverged, then converged, circled and jumped in non-stop motion. Dubbed a “poem of motion”, the film has had a major influence on all of modern animation. Among modern French animators, the most famous are J. Image, who is sometimes called the “French Disney”, and P. Grimaud, who became famous for his lyrical, poetic films.